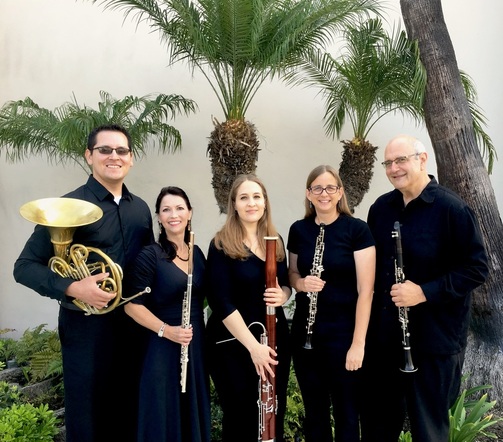 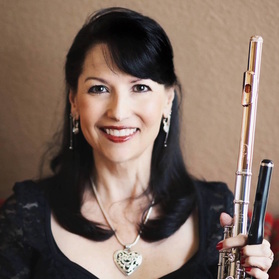 Born in Salt Lake City, Cindy Anne Broz began studying flute at age 9. She received a B.A. in Music: Flute Performance from the University of Utah. During this time, she studied privately with Erich Graf, Jane Wadsworth, and Michael Vance. She regularly performed in masterclasses and summer seminars with Julius Baker (with whom she also studied privately), Murray Panitz, James Galway, and Jean-Pierre Rampal. While in Salt Lake City, Ms. Broz performed with the Salt Lake City Opera Orchestra, Salt Lake City Chamber Orchestra, and The Ballet West Symphony. Ms. Broz relocated to Southern California in 1982, where she continued an active freelance solo and ensemble career and developed a high level teaching studio. During this time, she was principal flutist with the California Consort Chamber Orchestra (2003-2008) under the direction of Warren Gref and was a featured soloist in performances of Mozart's Flute Quartet in D Major, Beethoven's Serenade for Flute, Violin and Viola, Haydn's “London” Trio No.1, Bach's Brandenburg Concerto No.4, and Mozart's Divertimento in D Major, K.131. She has also performed with the San Diego Symphony, The San Diego Chamber Orchestra, and The Classics4Kids Philharmonic. In 2009-2010, Ms. Broz performed as a soloist in Philadelphia, New York City, and Washington D.C. She also performed with the Opera North Company of Philadelphia, Concerts at Carmel, and for The Philadelphia Cathedral Concert Series. Ms. Broz currently performs with several professional chamber ensembles, including The WindSong Consort and Flûtes de Salon (which she founded in 2010). 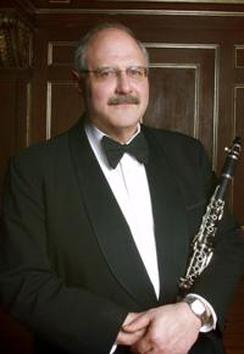 Mark Margolies worked for over twenty years as a freelance musician in the Boston area.  He could regularly be found playing clarinet, Eb and bass clarinets in orchestras and chamber ensembles throughout New England, as well as saxophones, flute, oboe and bassoon in theater pits, klezmer ensembles and other groups.
A champion of new music, Mark has many premiers to his credit including Julian Wachner’s Clarinet Concerto which was written for him and commissioned by the Quincy Symphony Orchestra.  He has been a participant in every Warebrook Contemporary Music Festival in Vermont since 1991, where he worked with such composers as Martin Boykan, Milton Babbitt, Marjorie Merryman, Andrew Imbrie, Bernard Rands, Sara Doncaster and many others.  He has recorded for the Albany, ARSIS Audio and Denouement Record labels.  He taught clarinet at Boston College since 1995 and woodwinds at Brookline Music School since 1989. In October of 2008, Mark moved to the San Diego area where he teaches and works as a freelance woodwind player in theaters, orchestras and other venues around Southern California.  He holds degrees in music and communication from Boston University.

Eduardo Contreras is an active horn player throughout Southern California and has appeared in various ensembles including: Redlands Symphony Orchestra, Inland Valley Symphony, Coachella Valley Symphony, Orange County Symphony, Riverside Lyric Opera, UCR Orchestra, Colors of the Wind Quintet, Redwinds Quintet and Winds By Design Quintet and more. Mr. Contreras earned his Bachelor of Music in Education and with honors of Pi Kappa Lambda from the University of Redlands in Redlands, California and is currently a Masters Candidate at the University of Redlands in Horn Performance studying under Laura Brenes. 2015-2016 marks Mr. Contreras' ninth year as Director of Bands at Raymond Cree Middle School in Palm Springs, California. He has had the great privilege of having one of the most active middle school instrumental programs in the Coachella Valley servicing over 200 students annually.  The ensembles and students take top honors at concert and solo/ensemble festivals throughout Southern California.  He also is a private instructor and clinician for many middle schools and high schools in the region. 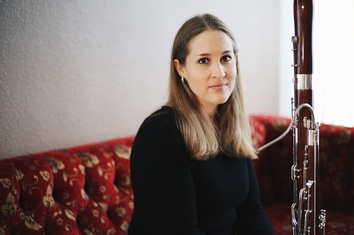 Katherine Ortega began playing the bassoon at age 13. She received her bachelor degree in music from the University of Southern California in 2008, where she studied with Judith Farmer. In 2010, she completed her master’s degree at the Chicago College of Performing Arts, studying under Dennis Michel. Katherine also received instruction from Rose Corrigan, David McGill and Ted Soluri during her education. Katherine currently lives in Temecula, where she freelances and teaches private lessons. She also does studio work and has recorded for television shows such as Eureka and The Walking Dead. 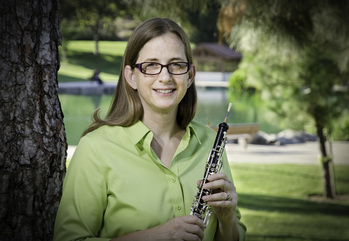 Cindy Smit began studying the oboe at age 11 in Plymouth, Michigan.  During the summer months, she attended the All-State program at the Interlochen Arts Academy and Blue Lake Fine Arts Camp. She graduated from the University of Michigan School of Music in 1983 with degrees in oboe performance and music education. While at The University of Michigan, she performed in the Symphony Orchestra and the Symphony Band under the direction of H. Robert Reynolds, as well as the Chamber Winds conducted by Carl St. Clair.  Her teachers include Arno Marrioti, Harry Sargous, and Robert Sorton. After moving to Rancho Cucamonga, California, Cindy frequently attended  summer chamber music workshops at Humboldt State University.  She is currently performing with the Symphonic Winds of the Pacific, the Corona Symphony and the Corona Pops Orchestra at the Fox Theater in Riverside.  Cindy also enjoys playing in various chamber ensembles. 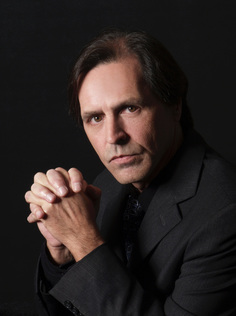 Corry Bell has appeared before audience in the U.S. and abroad as a solo pianist and keyboardist for concerts, festivals and shows.  Following his graduate studies with a degree of Doctor of Musical Arts, he has continued performing, coaching privately and teaching classes. Dr. Bell has earned numerous prestigious awards including the Dennis Workman Award, Irving Block Fine Arts Achievement Award, Bolzano, Italy Busoni International Piano Competition - Finalist with Recognition and Concerto Competition winner for USC, Indiana University, Riverside and Northridge symphonies.  He has performed in New Music Festivals nationwide, was a full scholarship recipient for Cal State Northridge and Juilliard School of Music, received a teaching assistantship from Indiana University, Bloomington and USC Fellowship.